The company website boasts a multitude of recipes that work with the seasoning. Everything from Jerk dry rub on your “smashed avo” breakfast, to full blown wet jerk seasoning to Jerk your favourite piece of pork. 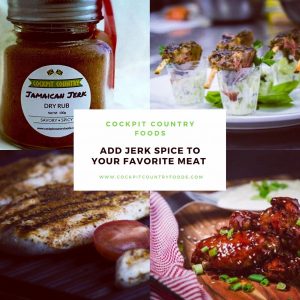 Cockpit country foods have been causing quite a stir with their jerk tasting events held throughout Sydney at different venues. SEE STOCKISTS HERE.

The owner operator Doug Lindsay is an inspired foodie, hailing from Faiths Pen, Jamaica. Faiths Pen is well known for the “Food stop”, which hosted over 30 street food vendors , and where all kinds of Jamaican food could be found. It is growing up around this humble food stop that informs Doug’s palate and seasonings.

Doug has been in Sydney for approximately 30 odd years and has been part of numerous Caribbean oriented organisations throughout his time. Doug, now known as Mr. Jerk, is on route to cause a revolution, quenching the thirst and demand for Jerk of the migrant population from the UK and North America, and introducing Jerk to Australian audiences. Doug is pioneering new uses for Jerk seasoning with tantalising recipes such as smashed avo with a dash of Jerk seasoning, which is a must try.

Cockpit country foods specialises in wholesales to restaurants, groceries, butchers and more. There is a list where you can find their products and sample various dry rubs and wet marinades. All products can be found on for online purchase https://cockpitcountryfoods.com/

Caribbean Sydney had the opportunity to have a chat with the owner ‘Mr Jerk’ – Doug Lindsay.